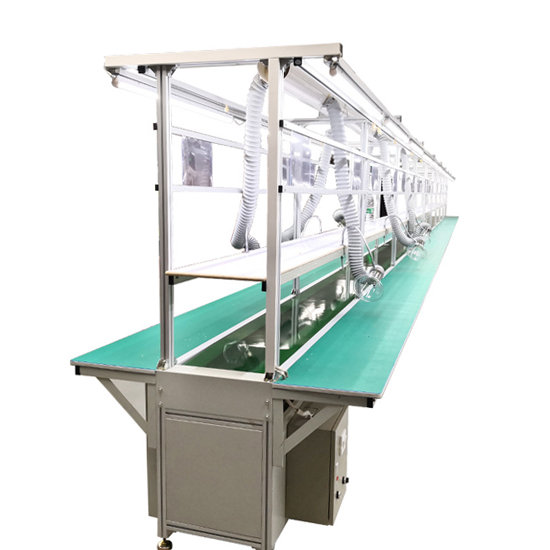 Conveyor assembly line uses the belt to drag the working plane to convey movement to achieve the purpose of the production process. This conveyor belt assembly line adopts a combined assembly mode. Further, it can set the number of working stations according to process requirements.

As we know, the conveyor production line table composes of a belt conveyor line and a workbench. Therefore, belt conveyor mainly plays the conveying function during production process. In addition, the workbench serves as an assembly operation platform. So assembly line table combines the two functions of conveying and assembling together. Therefore, conveyor production line is essential production equipment in many industries. Especially in the electronics industry, it is more indispensable. Because the equipment has good anti-static properties, it can meet the requirements for electrostatic protection of electronic products during processing. In addition to the electronics industry, it has also wide application in other fields such as home appliances, food, LED, and motorcycles, etc. 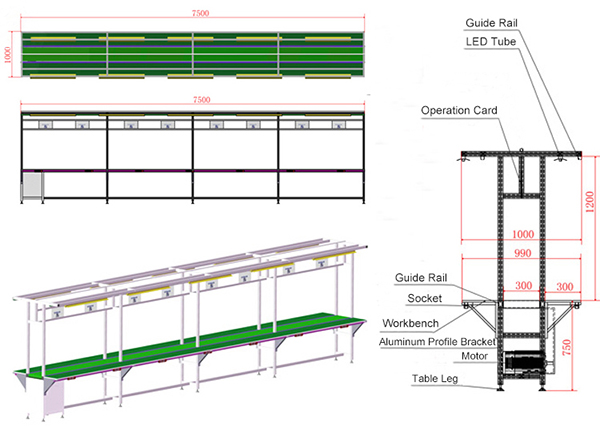 1. There are several types of assembly line table, such as double-side independent workbench, single-side workbench, and double-side bench working table. In addition, there are also circular and U shaped assembly line conveyor. Of course, the customization is acceptable according to customer needs.
2. The driving mode of manual assembly line is motor-driven conveying mode.
3. The usual width of the conveyor belt is 20～2000mm.
4. Materials of the conveyor belt: rubber belt, PVC belt, canvas belt, food belt, etc.
5. Conveyor belt types include cleated conveyor belts, siedwall belts, flat belts and non-slip belts.6. The size of the worktable is determined by the user. The conventional is 18mm thick wood board.
7. There are many choices for the work surface, such as fireproof board, ordinary rubber, anti-static rubber, oil-proof rubber, high temperature resistant rubber.

Other specifications of manual assembly line are below:

1. Use the 2HP Toho brand one-piece horizontal geared motor. Stable and reliable. Moreover, the head of the assembly line is made of square steel. So the motor is not easy to loosen;
2. Speed: 0~6m/min. 2HP frequency converter speed regulation. Safe and low noise.
3. The driving roller is 6 inches * 400. On the other hand, the driven roller is 3 inches * 400.

2. Standard screw connection, so there will be no damage when disassembled many times. Therefore, it is convenient to disassemble and assemble. And it is stable and not deformed;

3. The guide rail material of the assembly line conveyor is aluminum profile. It is assembled by 40*60 aluminum square tube. So it is not easy to pollute electronic products.

5. The bottom of the conveyor belt is supported by galvanized pallets. Moreover, there is a φ25*400 galvanized roller support per meter. To ensure that it is not deformed. At the same time, the transportation is stable.

6. Assemble the power supply system with galvanized wire trough and 4mm2 power cord. In addition, each station is equipped with a long socket with multiple holes. 1pc per 1 meter.

8. The craft guide bookshelf adopts H-shaped aluminum material. A set of A4 operation card sets are installed in each station.

9. Install two special aluminum materials on the top of the lamp holder.

10. The lighting adopts T5 18W single LED tube with cover (with independent switch). The LED tubes are distributed on both sides of the assembly line belt conveyor table.

1. The carrying product is usually light-duty and less restrictive in shape.
2. Assembly line conveyor runs synchronously with the production line. At the same time, it can also achieve product turnaround.
3. Use belt as carrier to convey. So it can realize the stable conveyance of products with low noise.
4. Conveyor belt assembly line can convey products over a long distance.
5. The workbench adopts assembly line operation, so it can greatly improve the production efficiency.
6. The workbench can be independent, combined, and easy to adjust. At the same time, manual assembly line table can be freely designed and assembled according to the operation needs.
7. As the work surface adopts anti-static rubber, it can reduce static electricity generated during friction. So it can prevent the accumulation of static electricity from affecting work.
8. It can reuse the material. Generally, the assembly line conveyor system uses aluminum profile as the frame. As we know, the aluminum profile can be reused. It saves production costs and is environmentally friendly.

First of all, it needs to confirm the type and sizes of the assembly line conveyor according to the production situation. Determin to choose straight or circular or U shaped assembly line. For example, the normal size of a 20 meters double-side assembly line table is 20m (length)*1.18m (width)*1.95m (height). Among them, the workbench height is 750mm.

Secondly, importantly, understand the composition of each part when purchasing an assembly line belt conveyor:

The power part of the assembly line mainly includes the following parts, such as motors, frequency converters, etc. Regarding the motor, it is mainly about the power. We should confirm the motor according to below parameters, such as the length of assembly line, the width of the conveyor belt, and the weight and size of the workpiece. Manual transmission and frequency converter are the accessory choices when purchasing assembly line. You can choose one of the two. Under normal circumstances, the assembly line below 15 meters usually adopts the speed regulating motor to control the speed. Because it is simple and convenient.

The main components of electronics assembly line are as follows: guide rails, brackets, rollers, conveyor belts, foot cups, support plate, etc. The main frame can be made of aluminum profile (beautiful and expensive) or painted square iron tube (cheap). Among them, the support plate is an optional accessory. But other items are all necessary accessories for assembly line conveyor systems. The specifications and quantity are determined by the equipment length.

The biggest difference in conveyor belt assembly line is the material. The material will largely determine the price of the whole set of equipment. Therefore, you must fully consider your own application when purchasing an assembly line. The common frame materials are carbon steel, aluminum profile, stainless steel, etc. The price is the lowest for carbon steel and the highest for stainless steel. In addition, the conveyor belt is generally 2mm or 3mm thick green PVC anti-static conveyor belt.

How to Install Assembly Conveyor System

Firstly, determine the installation location of the assembly line belt conveyor. Place the belt and frame parts in order. Then position the motor mounting frame. Next, loosen the bearing housing screws of the drive roller. Then pull up one end of the roller and put the belt into the drive roller.

Below is other steps:

2. Fix the lights stand of the assembly line conveyor

Firstly, determine the position of the dashboard according to customer requirements. Similarly, fix the 20*40 profile on the inside of the lamp stand. After fixing, install the board.

4. Fix the workbenches on both sides of the assembly line belt conveyor

First of all, fix the prepared tripod on the legs. (Note: When fixing, remember to reserve a place for the board and rubber). Then fix the 20*40 profile on the tripod. At this time, the profiles should be on the same level. Finally, lay the wooden boards and paste the anti-static rubber.

6. In the end, test the conveyor belt assembly line

Connect the power cords and plug-in cords of the device. Start the switch, and then debug the belt operation. If find that the belt is running off, stop immediately. Debug until the belt is as wide as the guide rails on both sides.

Before running the conveyor belt assembly line, we must first confirm whether the equipment is in a safe and intact state. Then check whether the difference between the power supply voltage and the equipment rated voltage exceeds ±5%. After all these are checked, proceed as follows:

1. Turn on the main power switch. Check whether the power supply of the device is normal. Then confirm whether the power indicator light is on. If it is not normal, check to see where the problem is. Only when it is normal can you proceed to the next step.

2. Turn on the power switch of each circuit. Check whether it is normal.

4. During the operation of assembly line conveyor, it must observe the design capability of the assembly line.

5. In addition, be careful not to touch the moving part of the manual assembly line. Non-professionals are not allowed to touch electrical components, control buttons, etc.

6. During assembly line operation, don’t disconnect the downstream stage of the inverter. Unless it is required for maintenance, the inverter may be damaged. The maintenance must be carried out when the frequency conversion operation is stopped to ensure safety.

7. After the conveyor belt assembly line stops, press the stop button. It can only cut off the main power supply after the system is completely stopping. So the lifetime of the manual assembly line be longer.

When installing and using the electronics assembly line, it usually encounter the following two problems.

3. The rear roller bearing is damaged and does not rotate. Or the bearings of the upper and lower rollers are damaged too much. This will increase the resistance and cause slippage.

4. Too fast start-up speed can also cause slippage. At this time, you can start slowly. If use the squirrel cage motor, it can start after jog twice. It can also effectively overcome the slipping phenomenon.

5. The load of the conveyor belt is too large. It also causes belt slippage when belt load exceeds the capacity of the motor. The advantage of slip at this time is to protect the motor. Otherwise, the motor will be burnt after a long time. But for operation, it is a slip accident.

Conveyor belt deviation is one of the most common faults when the conveyor belt assembly line is running. There are many reasons for the deviation. The main reasons are low installation accuracy and poor daily maintenance.

During the installation process, the various rollers should be on the same centerline as much as possible. And they have to be parallel to each other. This way the conveyor belt will not run off the track.

There are no reviews yet.